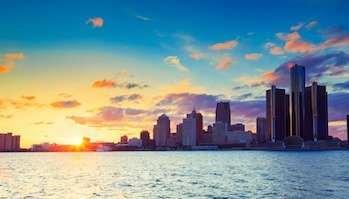 At least in the Downtown and Midtown core, Detroit’s comeback has “an air of inevitability.”

“Developers are betting big on Detroit,” says Marc Nassif, senior managing director at BBG. “There are some major developments underway or in the pipeline that will cement Detroit’s status as America’s comeback city.”

Several “game-changing” projects were featured at the 2017 Detroit Commercial Real Estate Summit, where Nassif moderated a state-of-the-market panel discussion. But if Detroit is set to make good on its promise, three projects in particular deserve recognition as the catalysts, Nassif says.

District Detroit is a dramatic downtown transformation that started in 2014, when the Ilitch family broke ground for the new Detroit Red Wings hockey arena along with apartment and office buildings, restaurants, shops, and parks in the surrounding 50-block area. The redevelopment—which ranks among the largest investments ever made by a team owner to a city—has been dubbed Detroit’s “entertainment district, super-sized.”

With five distinct neighborhoods, six world-class theaters, ample green space and amped-up nightlife, in addition to three other professional sports venues, District Detroit appeals to a broad demographic, not just sports fans. The project connects downtown to Midtown in one contiguous, walkable area and is redefining arena development in an urban core by fully integrating it into the fabric of the city.

If Detroit champion Dan Gilbert’s proposal to build a Major League Soccer stadium at the site of the existing “fail jail” is green-lighted by Wayne County, Detroit will be the only city in America with five major league sports venues (baseball, football, hockey, basketball and soccer) “all in the heart of downtown, and all within walking distance.” Nassif says.

The Hudson Block project (another Gilbert brainchild) proposes to build the tallest building in Detroit—a 734-footer—on the site of the old Hudson’s department store as part of a mixed-use development including multifamily, office and retail space.

Among all the new and proposed downtown developments, Hudson Block is deemed “special” and highly symbolic. That’s because “every Detroiter over 40 has fond memories of going to Hudson’s during the holiday season,” Nassif says, and the store’s closure was lamented by some as “the passing of an era.”

Revitalizing the site will have a profound “economic and experiential impact” on Detroit, not the least (or best) of which is a new high-water mark for the city’s rental market.

The long-awaited opening of the QLine streetcar line in May 2017 is the third truly “game-changing” project for Detroit, Nassif says. Running along Woodward Avenue, the QLine is expected to fuel residential and business growth and is a sine qua non  of Detroit’s rebirth as a Millennial paradise, top tourist destination and technology hub.

“Detroit’s gritty image as a Rust Belt town will always be part of its narrative,” Nassif says, “but what we’re seeing is a reinvention and rebranding of Detroit as a hot real estate market and as a place for residents and businesses to call home.”

← Industrial Sector Hits a High E-Commerce Gives Industrial Its Day, But What Does the Future Hold? →