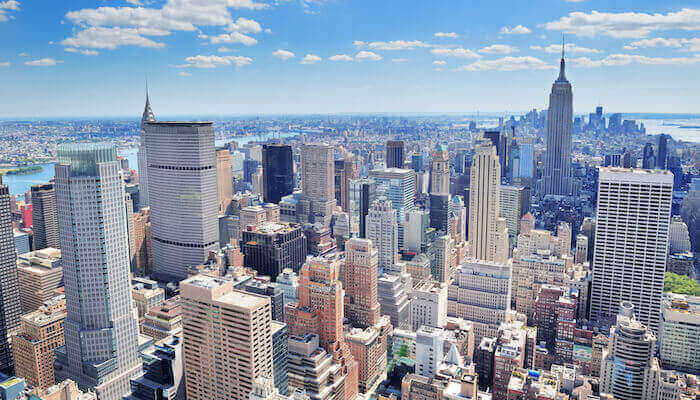 Two recently released, interactive maps show how New York City has changed over the years and how it might look in the future. The digital tool NYC Street Map, created by the city, offers a trip down memory lane, showing historical development street by street. By detailing every active construction site in the city with daily updates, the Active Major Construction map and database from the Department of Buildings gives users a glimpse into the future.

But what about the current state of the NYC market? Cautious optimism is the prevailing mood, as it appears the commercial property sales decline of the past two years is slowing.

Here are some snapshots of particular sectors, boroughs, and trends.

Retail rents are dropping citywide with food and beverage shops accounting for the most leasing activity. New York City is the biggest market nationwide for coworking space. Lower Manhattan saw its strongest quarter of office leasing in seven years even as the vacancy rate rose above 11 percent, almost certainly due to the opening in June of 3 World Trade Center. The $25 billion Hudson Yards megaproject will bring office, hotel, retail space—including a seven-story mall—and “groves” of towers. New York City’s hotel pipeline is the nation’s largest.

Some 120 million square feet of apartment projects are underway, with five of the top 10 multifamily projects (ranked by unit size) going up in Queens. At the same time, luxury and affordable housing projects are redefining the Bronx, with Zillow reporting that several neighborhoods there saw double-digit price increases in 2017 while average prices across the city decreased.

New York City has almost everything needed to lure companies in the burgeoning life sciences industry, including labor and life sciences institutions. The big thing it lacks is the right kind of real estate to accommodate such companies. This puts the city at a disadvantage as the industry is “poised for an explosion,” the Commercial Observer reported in its coverage of the first-ever Life Sciences Real Estate Development Symposium, held in June. Already, the city is working to address the issue, unrolling the $500 million LifeSci NYC plan to develop the industry in the city.

Once leery, landlords have largely embraced the pop-up retail concept. Now, they’re slowly getting on board with the current pop-up museum craze that’s taken hold of the city and doesn’t seem to be slowing. As a business model, a traveling museum can be a tricky concept for lessors to grasp, but as the Wall Street Journal reported in July, pop-up museums have become “Instagram fans’ favorite place to pose.” They’re so popular, in fact, that Forbes this summer compiled a top-10 list of pop-up museums to visit in 2018, calling them “all the rage right now.”

← How Technology is Shaping the Appraisal Process and Profession Multifamily Trends from Coast to Coast, with a Focus on Five Markets →