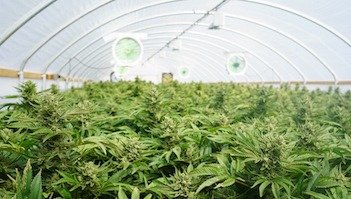 The ascendency of marijuana real estate has investors feeling high. But it may be a mistake to invest with the giddy assumption that the market has nowhere to go but up.

For now, the industrial warehouse sector continues to skyrocket as marijuana legalization spreads across the United States. Commercial marijuana is generally grown indoors for security and quality control, and since local laws and zoning codes often limit where such facilities can be located, industrial warehouse rental rates are steep in general and exorbitant for growers. In Portland, Maine, growers routinely pay three times more than local market value for warehouse space; in Colorado, they’ve shelled out as much as 10 times the market rate.

Several other factors are driving up the cost of marijuana real estate. The burgeoning industry’s need for warehouse space coincides with increased demand for warehouse distribution centers fueled by online shopping.

Since cannabis marijuana is not legal under federal law, only state to state, most federally chartered banks won’t lend to pot producers, and producers tend to prefer to lease properties free of bank notes to avoid disruptive default and foreclosure actions. That creates opportunities for real estate investors who can afford to pay cash for coveted warehouse space, but there are risks involved.

President Donald Trump has expressed tepid approval of medical marijuana, but his pick for U.S. Attorney General, Jeff Sessions, vociferously opposes legalization. Unlike the Obama administration, they could crack down. On the other extreme lies the prospect of deregulation, which would make the marijuana industry less lucrative.

The proliferation of outdoor growers is another risk factor. Producers are developing techniques to increase the quality and consistency of pot grown en plein air. Undeveloped land tends to be cheaper than warehouse space, and if more growers move their operations outdoors, warehouse demand will decrease.

Yet another cause for concern is the disappointing IPO for Innovative Industrial Properties, a medical cannabis facilities REIT that raised $67 million instead of an expected $175 million.

Risks notwithstanding, with medical marijuana legal in 28 states and recreational marijuana legal in eight, the industrial sector is on fire and won’t flame out anytime soon. Still, real estate investors who overpay in a paroxysm of optimism may be left feeling dazed and confused if and when demand and rent rates level off.