Downtown Phoenix is Heating Up—In More Ways Than One 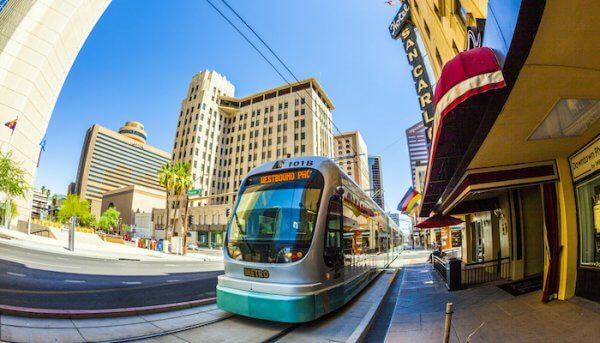 It’s been said that Phoenix never had a proper downtown. That’s not exactly true, but one thing is certain: Phoenix’s central business district in the next 10 years will be densely developed, walkable, and teeming with millennials and techies.

Phoenix is experiencing its biggest downtown building boom in decades. Thousands of apartments have been planned or built, with no slowdown in sight. This includes a skyline-changing $100 million apartment tower planned for the Arizona Center which, at 31 stories, will be among the tallest buildings in the state. The Arizona Center itself is undergoing a $25 million makeover to cement its standing as Phoenix’s downtown entertainment destination and to open up the introverted space to the surrounding streets and neighborhood. Complete with office space and a hotel, the revamped Arizona Center will be the downtown’s first semblance of a live-work-play urbanist design.

A large number of new buildings completed in the last two decades have been subsidized with help from the Government Property Lease Excise Tax, a type a tax break for developers whereby Arizona cities take land titles from developers and lease them back so the developers pay a lease excise tax rather than property taxes for a certain period. In areas like downtown Phoenix that are officially designated as blighted, developers pay nothing for the first eight years. This incentive is one reason downtown Phoenix has fewer empty lots and unused buildings, but it has been criticized as an unfair advantage and its application has led to a lawsuit against the city.

Besides commercial development, Phoenix is piecing together “real city” bona fides including its expanded light rail system, paid for in part by a voter-approved sales tax increase, and a bike sharing program. Phoenix enacted its Walkable Urban Code two years ago to foster livelier downtown streets and mixed-used development. Perhaps the surest sign that downtown Phoenix has arrived is the upcoming arrival of its first grocery store. For some time the city’s core has boasted world-class restaurants, big-league sports stadiums, and frou-frou boutiques, but not until now has there been enough residents to support a grocery store—a turning point that moved the Arizona Republic to wax poetic: “Thank you to the dreamers, believers, developers and new residents who have turned downtown Phoenix into a place to live, work, play and, soon, shop for groceries.”

Made in the Shade

Dreamers and developers can bring about a lot of changes, but they can’t change the weather. Due to its desert location and climbing temperatures, Phoenix has been called the world’s least sustainable city and climatologists worry about its future habitability. Already, the region’s extreme heat occasionally grounds airplanes and sends people to the hospital with contact burns from their car interiors. The city’s urban forest is shrinking, and its urban heat island is becoming a health hazard. Besides safety and sustainability, the problem with the unrelenting heat is that it keeps people indoors, giving Phoenix the appearance of a ghost town.

Downtown boosters urge city leaders and developers to make their vision of a walkable city feasible. That’s no easy feat, as The New York Times points out that doing any outdoor activity in Phoenix in summertime is “borderline heroic.” But the city has a Tree and Shade Master Plan and its Walkable Urban Code requires that developers’ designs include features like trees and shade structures for pedestrian comfort. As part of this plan, Phoenix commissions public art installations that double as shade structures.

Downtown advocates say developers must be part of the solution and that the city should hold them accountable. It has been recommended, for example, that commercial properties be inspected to make sure they have the number of trees outlined in their city-approved site plans. It’s imperative that efforts to transform downtown Phoenix into a vibrant city be sustainable. When shortsighted concessions are given to developers, a city’s very survival could be at stake.